How Does Night Vision Work? 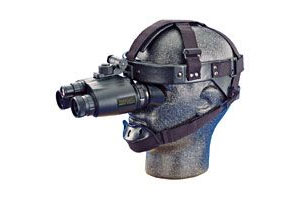 This article is aimed at helping you understand night vision devices. By understanding the different types including passive starlight, active starlight, active infrared, image intensifier scopes along with combination systems and the principles involved, you should feel confident when it comes to purchasing a night vision device - be it for recreation, sport or surveillance purposes.

In the course of the article we shall see how each kind of night vision device works, and evaluate its' effectiveness under a variety of lighting and weather conditions. Understanding the general principles will enable the reader to choose between different price and operational categories of device so that they can make an informed decision on budget and convenience.

One of the deciding factors when choosing night vision devices is knowing whether it will be used predominately in slight darkness, low light situations, or complete dark, where there is no light source whatsoever. As we shall see, there are devices to suit each of these situations, and knowing how they work will help make the right decision.

The overall aim is to empower the reader with the knowledge that they need to judge which of the available devices is appropriate in terms of proposed usage conditions and budget.

Without going into too much scientific detail, the basic principle of night vision devices is that incoming photons strike a photoelectric plate. A photoelectric plate is one which reacts to being struck by photons by releasing a number of charged particles, electrons, for each photon that strikes it.

These electrons are then accelerated through a photomultiplier, which produces even more electrons by using a very high voltage to propel them down a tube. The electrons then strike a phosphor screen, which reacts to them by creating pools of light which is visible to the human eye.

While the above is reasonably accurate, it is necessarily a slight simplification of the processes involved. The most important point to remember is that the most common devices merely amplify the existing light. Consequently, the image is slightly blurry and low resolution, but perfectly adequate for many low level hunting applications.

There are several generations of device, each using slightly different principles to achieve the same result (with differing degrees of success). Some are more technologically advanced than others, and consequently come with different price tags attached to them.

So called second generation devices work by taking the electrons and forcing them through a device known as a micro channel plate (MCP) which multiples them, and produces a much larger stream of electrons which are then propelled towards the phosphor screen as before.

The result is a better image, which is somewhat less fuzzy, and can be viewed whilst moving in reasonable conditions. They also cost about $1,000 more, but well worth it for the hardened night hunter.

There are also third and fourth generation models used in military and police environments which use chemical layers over the phosphor screen to achieve a brighter image with better contrast.

All of the above rely on some light to work effectively - unlike passive scopes, however, they only need a very small amount of light, and can amplify it by up to a thousand times. They will still not work in complete darkness, however, but this is a very rare situation to be in.

For operation in complete darkness, or in cases where extremely high image clarity is a requirement (emergency, police, military and surveillance), an infra red augmented device will be needed.

The simplest, and cheapest form of night vision devices, sometimes referred to as starlight or passive night vision scopes use an abnormally large objective lens. The more expensive versions use one which is also coated in multiple layers of a special chemical which allows them to transmit up to 95% of the light back towards the viewer.

These work by capturing whatever light is available, be it moonlight, low level sunlight, or even a streetlamp (for urban surveillance), and condensing it to a smaller area, which has the effect of pushing up the number of photons per square millimeter. The net result is a brighter image which the human viewer can resolve into a picture of the night.

These are the least effective, and are of no use at all in real night, where there is no light available at all. So, for night time surveillance or hunting, you will need a pair of true night vision goggles, binoculars, or scopes.

On the other hand, as a solution for use in low light (dusk, moonlight, dawn and so forth) they do offer a good compromise and have the advantage of being purely mechanical, with no electronics to require power or malfunction. They are also silent in operation and extremely portable, making them good for early morning or evening nature watching.

Some passive starlight scopes are now fitted with infra red projectors which illuminate the target with an almost invisible light source, which catches the reflected infra red light, and allows the viewer to "see" in the dark. These are good for a cheap, effective, close proximity solution for viewing wildlife at night. Humans can just about see the illumination, however, making them impractical for surveillance.

Active starlight scopes work on the principle that there is some light available, and they magnify it such that the image is clearer than if it were viewed with the naked eye. They do, of course, need to be powered. Anything that needs power becomes slightly less practical if you are going out into the great outdoors. So, the first rule is that if you are going somewhere where power outlets are not guaranteed, then a battery powered version will be needed.

The basic premise of an active infra red night vision scope is that it intensifies available infra red light which is out of the human viewing range, but which is exuded by almost everything that surrounds us at night. The key operating principle is that the device needs to take this light and convert it, as easily as possible into something visible.

Operation is similar to a regular active scope, with the exception that the infra red night vision device is able to pick up streams of infra red wavelength photons, rather than regular light, and convert them into a phosphor image. The additional technology required makes them more expensive, but they do offer the ability to be able to see in absolute darkness.

Image intensifiers use a combination of all available light sources, visible and not to produce excellent, natural results, but are at the top end of the price range, and usually only possessed by the military.

With the advent of computers it is also possible to purchase purely electronic image intensifiers and night vision systems, such as those in modern video cameras. These work by using a combination of low light and infra red, which is then enhanced electronically to produce an acceptable image for filming.

As a consumer product this approach is satisfactory, however for true wildlife photography in the dark, a much better quality, and hence purely optical, solution is necessary. Video cameras are also quite noisy and likely to scare of the subject - no good for hunting, surveillance or nocturnal bird watching.

As you can see there are many aspects to consider before coming to a decision about which of the night vision devices is best for you. Hopefully this article will have made your job easier. For more information on the night vision equipment available you can visit the relevant links.

Got a Nice View?

Got a beautiful view of the ocean or a patio...

Get in the Game: Choosing Binoculars for Football and Other Stadium Sports

With football season in full swing and the Major League...

BinocularsPlus.com is committed to providing our customers with the best...

Essentials Items for an Autumn Hike

Strap on your hiking boots and get ready to be...

Must-See Reality Finding the right binocular for a special occasion...